Will know in today’s post how to make pvc plastic aadhar card All the Aadhar Cards you must have seen online till today are of paper, which are given to you after lamination in it to strengthen it a bit. But do you know that you can convert your Aadhaar into a plastic Aadhaar card, also known as PVC, for example, PAN cards and debit cards are made of PVC material which is much stronger than a normal paper. You can also call it a plastic card. The biggest problem of paper is that it melts in water, but plastic is not a mistake in water, so it is considered a better option. 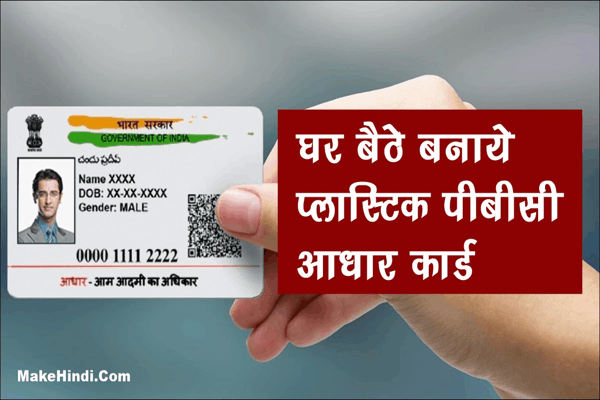 As we all know that in India Aadhaar is an important document which is required in private and all government places, from admission in school to getting a job, Aadhaar has been made mandatory everywhere. This is the reason why now the Government of India is giving the option of PVC (Polyvinyl Card) to make Aadhar even more secure, which you can get by paying a small fee. The plastic base is already stronger and comes with security features, which is very difficult to duplicate, in this way you can make a secure base for yourself.

For this, you have to go to the official website of Aadhar card uidai.gov.in, here you have to choose the option of PVC, next you have to pay it online by any means, within a few days of making the payment, by post to the address given in your Aadhaar. Plastic Aadhar card will be sent.

Note – If mobile number is not registered in your Aadhar, then after entering your 12 digit Aadhar number, tick on My Mobile Number is Not Register and enter any of your mobile number and get OTP in it.

First of all, it is plastic, due to which there will be no effect of weather in it, its size is also like smart card, meaning it is the size of ATM and PAN card, which you can easily carry anywhere by keeping it in your purse or pocket. can. All the letters are clearly visible in this because its printing quality is very good.

The things printed in it are quite different from the normal Aadhar card, so it is quite difficult to clone it. Apart from this, whenever you go to get an old Aadhar card, then there you have to pay a fee of Rs 50 and lamination is given in your Aadhar but in 50 rupees instead of the lamination card, you get a plastic card which is much cheaper. Is.

Features of PVC base

The Guilloche pattern has been added to the background of the card, both on its front and back, in which you also get to see the invisible Aadhaar logo which can be felt. The date of issue of Aadhaar is not mentioned in the normal card, but in the plastic card, you will see a date near the photo, which is the date of issue of this card.

So now you know that how to make pvc plastic aadhar card If you also want to make your Aadhaar secure online, then you should also order for PVC card. Its fee has been kept at Rs 50, which is much less than the card you get, apart from this, the process of ordering it is also online, which you can get by paying from your mobile sitting at your home.