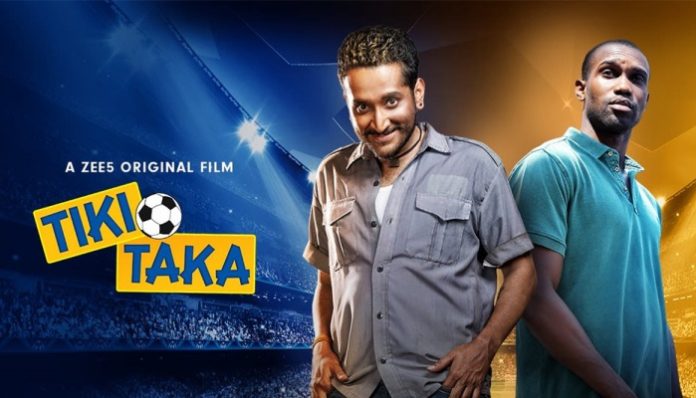 ZEE5 is emerging as one of the top OTT platforms in India. Slowly and steadily it is taking on worldwide giants like Netflix and Prime Video all thanks to the unique and creative content it has been delivering for the last couple of years. Now, ZEE5 is back with yet another unique tale titled ‘Tiki Taka’. Directed by Parambrata Chattopadhyay, Tiki Taka is fetching positive reviews from viewers. The current IMDb rating of the movie stands at 9/10 with almost 800 votes. Recently, I watched the movie, and here is my review.

Plot: It all starts with a comedy of Errors

#TikiTaka is a light-hearted comic-drama whose heart lies in football-crazy Bengal. The story is simple and predictable with a lot of drama and comedy of errors. The film takes place in flashbacks where Raju (Parambrata Chatterjee) narrates to two documentary filmmakers the story of how he met Khelechi Agjubi (Emona Enabulu), a  Senegalese national, and what happened during a fated derby between Youth Bengal and Notun Bagan.

Tiki Taka revolves around Khelechi Agjubi (Emona Enabulu), a Senegalese national, who comes to Kolkata to deliver a drug consignment to drugs kingpin PK (Saswata Chatterjee). However, a comedy of errors starts when PK picks up the wrong guy at the airport and Khelechi ends up with a taxi driver Raju (Parambrata Chatterjee). Raju is a man with a pure heart who is always ready to help everyone. Raju drops him off at the wrong address. Khelechhi now finds himself in big trouble as the drug lord wants him dead. He has no money to return back to his ailing mother who needs a surgery.

Raju decides to help Khelechi. All he does is spread a rumor through Bonnie, who is a struggling journalist. He spread a rumor that Khelechi is a famous footballer who has come to Kolkata to play in a club. This news spread like a fire in the football-loving city and Khelechi becomes an overnight sensation. What follows is a kidnapping and a football and an emotional roller-coaster ride.

Tiki Taka stars some of the prominent names of the Bengal film industry. It boasts of some honest performances by the lead actors. Parambrata Chattopadhyay and Emona Enabulu’s brotherly chemistry is the highlight of the movie. Both of them are a delight to watch. Saswata Chatterjee as PK is top-notch. and Paran Banerjee is honest and believable. Ritabhari also impresses in a neat role.

Tiki Taka is enjoyable and is definitely a good one time watch. For me, the major highlight of the movie is Raju’s commitment to safely send his ‘brother’ Khelechi to his country. The movie genuinely portrays brotherly love between two nationals divided by color and language. There are some emotional scenes that touch your heart. Focus on the craze of club football in Kolkata emerges as one of the prime highlights of the movie. Overall, Tiki Taka is one decent movie that every football fan would love to watch. It’s more #Goalmaal than 2020. If you know what I mean.

Tiki Taka is streaming on ZEE5. It is emerging as one of the leading OTT platforms. It has a huge collection of movies, TV shows, and web series