In just a few years, livestreaming went from a silly little hobby to one of the biggest forms of entertainment on the planet. Whether that’s good is up to you, but one thing’s for sure: In terms of how disastrously things can go wrong, streaming is simply unparalleled. Look at how …

In August 2019, streaming superstar Tyler “Ninja” Blevins announced that he was taking his talents from Twitch to Mixer, a rival platform owned by Microsoft whose biggest claim to fame was its roster of big-name stars like, um … Ninja. While it was clearly a great business move for Ninja and Mixer, it left Twitch with a massive problem. He was one of their most popular streamers, with approximately 14 million followers. If they didn’t figure out a way to stem the bleeding, they’d have no option but to start selling Dr. Disrespect’s bathwater to make up the shortfall, which is no life for anyone.

One solution was to convert Ninja’s abandoned channel page into a switchboard that promoted other, lesser streamers to the masses still flocking to it. This proved to be a not-terrible idea, and they even included a little Mario joke about how Ninja was “in another castle” to show how definitely not-mad they were about the whole thing.

Not to be outdone, Twitch apologized (again) for our horrible human bodies, and vowed to investigate how this feed was allowed to broadcast for so long without being picked up by the site’s content filter. That last one’s especially weird, given how Twitch can’t stop bringing the “sexual content” banhammer down on everyone from women wearing gym clothes to SpongeBob. As for Ninja and Mixer, things are going swimmingly, thank you for asking.

4. A YouTuber Brags About Modding A Car He Bought On Finance, Gets Wrecked By BMW

Unless you’re a car buff, you’ve probably never watched a video by Riccardo “LivingLifeFast” Senior. Think Top Gear, but without as much casual xenophobia.

As much as LivingLifeFast loves cars, however, he sure doesn’t love reading the paperwork they come with. In June 2019, Senior revealed that BMW had revoked the financing on his recently purchased BMW M4, worth 60,000 pounds, after discovering that he’d extensively modified the car to run at 720hp instead of the standard 444hp. How did they catch him, you might wonder? They tuned in to his channel, where he documented the entire process.

Hold your internet outrage until the end, please. Under the financing arrangement he signed, which is common in the UK, LLF was effectively leasing the car until the end of the several-year arrangement, at which point he would’ve been able to buy it outright at a reduced price. By modding the BMW, however, he effectively staked his claim forever, and so BMW punched his card. Read your contracts, kids.

In July 2019, a streamer by the name of JadedBlue was enjoying a game when his cat, Kelsier, started gagging. JadedBlue leaned over to help, and in a move reminiscent of a horror movie, the stream immediately went dead, leaving viewers wondering what the hell had happened.

In an announcement later posted to his Twitter, JadedBlue revealed that Kelsier had barfed right into his computer, frying its innards and knocking him offline until he could repair the damage. Yes, there is a picture of the barf. No, we aren’t going to post it. Yes, you’re very welcome.

A 20-Something Vlogger’s Stream Glitches, Exposes Her As A CGI-Disguised 58-Year-Old

“Your Highness Qiao Biluo” was a vlogger in China with a 100,000-strong following. Her fanbase not only lavished donations on her, but practically worshiped the ground she streamed on. The secret to her success? Her personali- her looks, of course. We’d describe her as “unnaturally” pretty, but that foreshadowing is a little too blatant.

On July 25, 2019, Bilou was streaming with a fellow vlogger when, unbeknownst to her, her computer glitched and took down the CGI filter she had apparently been using to disguise her true appearance, thus revealing her as a middle-aged woman.

While the internet devolved into arguments about whether this was karma for her deceiving countless horndogs or if those guys had it coming for being so image-obsessed, the incident caused Bilou’s follower count to change drastically … to 650,000 people. Although it’s entirely possible they’re all just waiting to see what this master illusionist has lined up for the future.

1PewDiePie Tries To Do Something Decent, And His Fans Absolutely Hate It

Felix Kjellberg, aka PewDiePie, is by now nearly as famous for his screw-ups as he is for playing video games. In 2016, for instance, he received criticism over his constant racist “pranks,” which included making “ironic” Nazi references, paying some people to make and hold up an “ironic” sign saying “Death to All Jews,” and livestreaming himself calling someone the N-word.

But things have changed. Why, earlier this year, PewDiePie announced that he was donating $50,000 to the Anti-Defamation League, an organization that combats antisemitism, like the kind found everywhere on the interne- You know what, this might work better with an illustration of what we’re talking about. 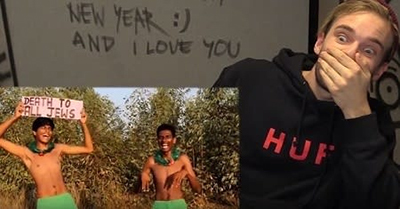 PewDiePie/YouTubeWe understand, Pewds. Sometimes you start playing Minecraft, and before you know it, you’re advocating genocide. It’s happened to all of us.

Kjellberg stated that this move was part of him “having come to terms with the responsibility [of being] a creator” — and that while his decision to donate to the ADL, in particular, might not “make sense to everyone, especially since they’ve outright spoken against me … I think it’s important. This just isn’t my fight anymore.” Well-said, Felix. Now let’s go to the comments and see the reaction.

In this article:comedy, humar comedy